African print, popularly known as Ankara, has gained popularity in the global fashion scene since 2010. The material is primarily associated with Africa mainly because of the tribal-like patterns and motifs. Since it’s ascension in global fashion, much talk has focused on whether or not African fabric is authentically African given the fact that the fabric was in fact originally made in Europe. 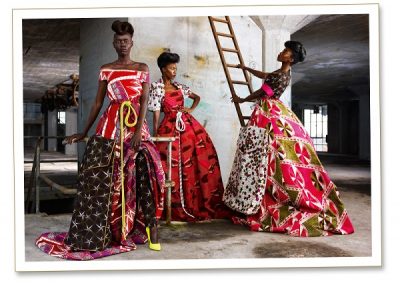 Ankara was formerly known as Dutch wax print. It was originally manufactured by the Dutch for the Indonesian textile market. But, by mistake or design, these prints garnered significantly more interest in West African than in Indonesia. Recognizing this opportunity, the Dutch decided to focus on West Africa. As such, the prints changed to reflect African culture and lifestyle more. African print was henceforth born. As you might suspect, this is the summarized story of the issue. For the full origin on African fabric click here.

The origins of Ankara are not at all African but rather European. However, I still see Ankara as authentic African Print because of what it represents (as opposed to where it was first made). Does the fabric represent African culture? Is Africa the first thing that comes to mind when you look at Ankara? Do Africans generally identify with the prints? I can confidently answer ‘Yes’ to these questions and as such proving the authenticity of the Print. Also, I see no reason why we can’t recognize the influence that the Dutch had on Ankara. After all, they’ve played their part but now it’s in the hands of Africans to use the fabric to promote our own culture.